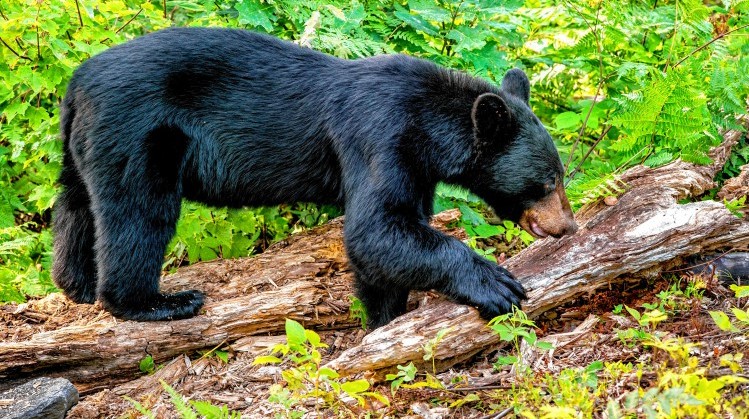 Each year we field a number of calls regarding bears that have hit by cars, entered a porch or garage, or damaged property.  Below are some of the most commonly asked questions as answered by the Massachusetts Division of Fisheries and Wildlife on www.mass.gov.

When is it safe to put out bird feeders?

If you live in an area with bears, it is best to avoid bird feeders altogether, as bears that find a bird feeder will often revisit that site, month after month, year after year. Bird feeders, bird seed, corn and other bird foods can draw bears into closer proximity to people and often result in bears losing their fear of people. When bears begin to use human-associated food sources, they will often frequent residential areas, not flee when harassed by humans, and may even cause damage by breaking into outbuildings or homes. If you choose to put out feeders, doing so in the winter when bears are denned may decrease the chances of a bear accessing your feeder. In general, bears are denned from mid-December through February. Although most bears in Massachusetts enter winter dens at some point, some bears can remain active for parts or all of the winter if food is available. It is important that you remove the entire feeder at the first sign of bear activity. Some bears have learned to simply empty bird feeders without destroying the feeder. DO NOT continue to fill a feeder if a bear is feeding on the seed.

For those people who want to enjoy birds in their yard, MassWildlife suggests using native plants and water features to attract birds. Using these methods may increase the diversity of birds you see and will prevent the unnatural feeding of a variety of wildlife species.

Is it safe to hike, run, bike or walk my dog in the woods?

Yes! It is safe to enjoy the outdoors regardless of what region of the state you live in. Dogs should always be leashed and supervised so that they can be kept under the owner’s direct control and avoid interactions with wildlife. Always be aware of your surroundings and if you happen to encounter a bear, enjoy the sighting! If the bear is unaware of your presence, then just back away and leave the bear alone. If the bear is aware of you, talk to the bear in a calm voice and back away.

What should I do if I see a Black Bear in my back yard?

If you see a black bear in your yard, enjoy the sighting, but be sure that you are not doing anything to attract the bear to your yard. Make noise by banging pots and pans, shouting, or using an air horn to try to scare the bear off. Once the bear has left the area, take a close look at your yard for potential bear food sources such as bird feeders, pet food, dirty barbeque grills, open compost, or trash and REMOVE those food sources IMMEDIATELY. Bears have incredible long-term memory will revisit places where they have found food, even months or years later. Bears that are frequently fed, either directly or indirectly through bird feeders or garbage, may completely lose their fear of people. If a bear then behaves in a way that is a threat to public safety it may be euthanized.

Why are there bears in my neighborhood?

Bears spend time in neighborhoods because food sources – bird feeders, garbage, open compost, grills, etc., are abundant and easy to access. Bears will readily use these food sources and will revisit them time and again as long as they are available. Bears that are attracted to human-associated food sources may be more vulnerable to being hit by a car, and may lose their fear of people. Once a bear finds a food source in a neighborhood, they will revisit that same location over and over again and will also start to search for similar food sources in other areas.

Why can’t MassWildife just relocate a bear if it becomes a nuisance?

Bears that repeatedly visit homes, facilities or businesses are almost always drawn to a food source. Removing the attractant is the best solution for the bear and people. Bear range in Massachusetts is large and expanding and bears can travel very long distances, so there is no logical destination for relocation. Bears will go to great lengths to return to their home range, and once they return, they will continue the nuisance behavior for as long as the food source is available. In extreme circumstances, where public safety is a concern, MassWildife may relocate a bear. These situations often involve a bear in a densely populated area where the public safety concern is due to the bear’s proximity to traffic or onlookers. In these circumstances, the bear is released within, or very near to its likely home range. In most cases nuisance situations can be avoided by modifying human behavior and removing food sources.

What should I do if I encounter a bear (face to face)?

Where are Black Bears found in Massachusetts, how many are there?

Bears can be found in all of western and central Massachusetts, as well as northwestern Middlesex County. Dispersing young males are frequently found within the I495 belt, with some showing up as far east as Newton. Dispersing young males have also been found in southeastern Massachusetts, and one bear ended up on Cape Cod in 2012. The bear population was last estimated in 2011 to be between 4,000-4,500 bears statewide.

Will a mother bear attack me if I get between her and her cubs?

It is uncommon for a black bear to attack a person in defense of her cubs; instead sows (female bears) send their cubs up a tree to avoid danger. She will call the cubs down when the danger is gone. That being said, should you encounter a sow with cubs, you should talk to the bear in a calm voice and slowly back away and leave the area. If the sow sends the cubs up a tree, do not approach the tree or remain in the area – you are the reason she sent the cubs up a tree and they will not come down until the danger (YOU) is gone.

When do bears “hibernate”?

Depending on food availability, Massachusetts bears typically enter dens between mid-November and mid-December and exit between February and mid-April. Bears in Massachusetts commonly den in brush piles, under fallen trees or a jumble of rocks, or in a mountain laurel or rose thickets. Pregnant females often enter dens the earliest (sometimes as early as mid-October) and those with newborn cubs (that were born in the winter den) typically exit in early April. Pregnant females will ALWAYS enter a den, as this is where they give birth. If food is available throughout the winter, males, lone females that are not pregnant, and females with yearlings may be active during the winter. Bears are not true hibernators – they can rouse easily and their body temperature does not drop substantially, but they can remain in the den without eating, drinking, or excreting for nearly 6 months.

Will a bear attack my chickens or livestock?