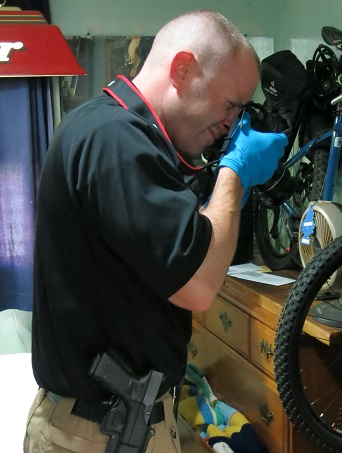 The Crime Scene Services Unit is a component of patrol and investigative functions and is under the general supervision of the Detective Bureau Commander.

The Northampton Police Department has designated Crime Scene Technicians (CST's) who have been trained and are proficient in forensic photography and fingerprinting.

These CST's are responsible for processing crime scenes by taking all necessary photographs, gathering all available fingerprints, and assisting in the collection of other various types of evidence.

In September of 2015, the Northampton Police Department received a Federal Department of Justice grant fully funding the cost of a new digital fingerprint machine from SAFRAN MorphoTrust USA.  This machine replaced our older Live Scan system. The SAFRAN system allows us to electronically document fingerprint images and transmit them to the Massachusetts State ID Section and Federal Bureau of Investigation with the paperless submission of a fingerprint record. This allows for a quick response on a subject's criminal history based on fingerprint submissions while we still have the person in our custody. Previously, inked fingerprint submissions were submitted by mail and responses ranged from days to weeks in some cases. Utilizing this technology, we have been able to verify questionable identities and confirmed active arrest warrants for many individuals.